Absolute Embrace of the Fabulous Serpent

It's been a while, folks! I have been keeping busy writing, entering competitions, and generally keeping myself entertained with films and CD launches and suchlike froth and bubble.

Two films couldn't be more contrasting than Embrace of the Serpent and AbFab the Movie, but Radiant Man and I went to see them a week apart.

The first is a serious and intriguing film, shot in B & W, about the journeys of two men in the jungles of Brazil, mostly by canoe down the Amazon. The first man, in 1911 is seeking an almost mythical flower that has amazing properties; the second man ostensibly following in the other's footsteps but really there to look at the rubber situation, as it's 1939 and so during the second world war. (Should have given a spoiler alert! ...)

This is a long but very worthwhile film that deals with history, environment, racism and the psychology of people confined in isolated groups. We enjoyed it!

The second film however, is a very different magnum of champagne. Unfortunately not vintage, more like your home brand and rather flat. There were certainly moments of chuckling in the cinema, but no splitting of sides. All the favourites from the TV AbFab are there, including Edina's granddaughter by the po-faced daughter and her African partner. But there are so many celebrities, either actors or obviously not, that it was difficult to concentrate on what little action there was. Barry Humphries as two characters is brilliant as always. Joanna Lumley's sneer is practically a character in itself. Edina is reduced by the threat of annihilation by slow drowning to tell her daughter she loves her, which statement she appears to retract before the end of the movie. Jon Hamm has a good line or two.

Radiant Man and I came out of the Art Deco cinema feeling as flat as the champagne. Probably the half hour of the TV version distilled the humour, leaving you wanting more. This didn't.

Hope this has been informative. Let me know via my contact page if you agree/disagree.

And have a good week!

Absolute Embrace of the Fabulous Serpent 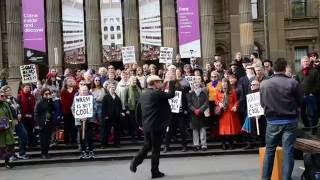 Warm is not cool!

Stephen Taberner and the Glorious Rabble: